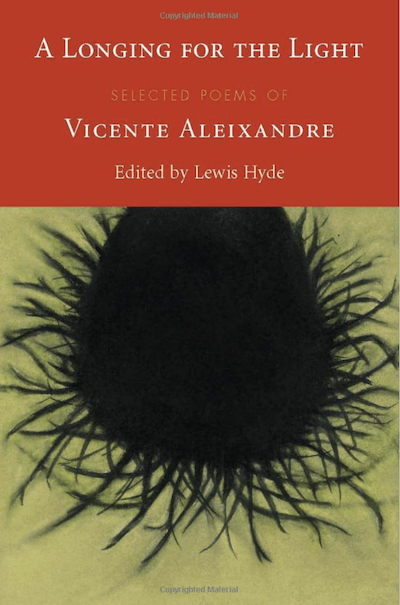 A Longing For The Light

The Spanish poet Vicente Aleixandre was awarded the Nobel Prize for Literature in 1977, at the age of 79. At the time, his poetry was barely known outside of Spain, and only two small editions were available in English translation.

For many years before that happy day I had been collaborating with Robert Bly on translating Aleixandre’s work and one of those available editions was ours, Twenty Poems of Vicente Aleixandre (Madison, Minn.: Seventies Press, 1977)

Finally, David Unger and I translated Aleixandre’s World Alone (Mundo a Solas) and Penmaen Press published it in 1982, as described below:

“This bilingual collection of 68 poems and two prose pieces surveys fifty years of the 1977 Nobel Prize winning poet’s work. In addition, the book includes Lewis Hyde’s introduction and a descriptive bibliography containing Aleixandre’s own comments on each of his books, taken from their prefaces. Divided into five sections to represent different phases of the poet’s writing, arranged chronologically, the poems reflect quite a range to the talent, from the early prose poems to the recent dramatic poems, from the hermetic and surrealistic to the perhaps most occasional, “On the Death of Miguel Hernandez,” (“Don’t Touch him. None of you could. He knew,/ only he knew,”) to love poems like “It’s Raining”: “This evening it’s raining, and my picture of you is raining. The day falls open in memory. You walked in. / I can’t hear. Memory gives me nothing but your picture. / There only your kiss or the rain is falling.” The translations, by Hyde along with 14 other translators, at their best manage to capture the sharp images and intellect of this amazing, renowned poet, who died in 1984 at the age of 86. This edition, the first paperback printing of the 1979 Harper and Row cloth edition (now out of print) is the only book of Aleixandre’s poetry available in English currently. Highly recommended for all collections.”
–Independent Publisher

“How fitting it is that Vicente Aleixandre has won the Nobel Prize! He is one of the greatest poets alive and his work stands for endurance, the roots under the tree of consciousness, the slowly growing trunk…. [He] was and is a kind of river, carrying trees torn up by the roots, everything turbid and wheeling, things turned up frightening in the sunlight…. [His] generation … jumped feet first into surrealism, which they felt not as a clique but as an ocean, encouraged each other, tried to pull poetry simultaneously into surrealism and into song, and worked to help Spain feel in herself the new energy rising, both rebellious and sexual.

“What happened? The rebellious energy they felt was felt also by the industrial workers and the farm workers. The defeat of the rebellious ended the energy flow…. Only Aleixandre, always in poor health, but stubborn, remained. The Franco people knew well where he stood, and he was kept silent by police and Control. In 1944 he was at last allowed to publish…. For the Nobel Prize to come to Aleixandre now is fitting, not only because of the energy and intensity of his own poetry, but because it comes at this moment in Spanish history. Spain is waking up after years of sleep, and Aleixandre’s poetry and stubborn presence have a strong part in that awakening.”

Lewis Hyde on the history of his Aleixandre translations:

I was in college at the University of Minnesota when I began to translate Vicente Aleixandre, then one of the last surviving of the generation of Spanish poets that had included Juan Ramón Jiménez and Federico García Lorca.

Some years later I worked with Robert Bly and The Seventies Press to bring out Vicente Aleixandre: Twenty Poems. Aleixandre himself helped us make the selection for that edition, finally published in February of 1977. The first printing was 1,000 copies, of which 100 were hardbound.

In October of that year when Aleixandre won the Nobel Prize for Literature, The Seventies Press edition was one of only two English language versions of his work in print. We issued a second printing of the paperback, another 1,000 copies (copies from the second print run have a banner saying “1977 Nobel Prize for Literature” across the dust jacket).

David Unger and I translated Aleixandre’s World Alone (Mundo a Solas), and in 1982 Penmaen Press issued the book in regular hardcover and limited editions with original wood engravings by Michael McCurdy. 100 copies of the hand-bound limited edition were printed, signed by Aleixandre, Hyde, Unger, and McCurdy. Copies of these editions are usually available secondhand.

In 1979 Harper & Row published the selected poems, A Longing for the Light. Rights to this book were bought by Copper Canyon Press in 1985, and they have kept it in print ever since.